The ground-breaking of the new Shining Star Care and Education Center resulted in a new public/private partnership project coming together in Hobart, WI.  These partnership projects are often known in the public development sector by the 3 P’s acronym. A  3 P’s project represents the public and private sectors coming together to work on a development.  Typically, it solves a problem or provides a need in the community. They often occur when market forces are lacking or an incentive is needed to bridge a funding gap. It’s vital that a “win-win” factor is present.

The ground-breaking event was a classic case of how a public/private partnership project should work. In this case, the problem facing Hobart, is a fast-growing village of 7,000 residents adjacent to the city of Green Bay, with the lack of a daycare facility.  Compounding the situation was the Pulaski School District, which serves the Hobart community, had a need in the southern part of its district for after-school programs for children from households with parents who work outside the home. A facility that could handle the community’s growing needs and the school system’s challenges was needed.

For several years, Elaine Willman, Community Development Director for the Village of Hobart, courted owners of Green Bay area daycare centers and encouraged them to expand in nearby Hobart.  Elaine pulled out all the stops, contacting everyone she knew and interviewing half a dozen day care providers.  Smet sent out the first surveys to village residents.  Hobart’s Finance Committee followed up by mailing another survey and then conducted a door-to-door census count of children to verify the need.  The village left no stone unturned as to who might be able to help. Elaine said, “We watched all these wonderful families move in and become part of Hobart and we have no daycare.  We knew we had to do something. Maybe it was the recession, but the market was just not responding”, she said.

Elaine was not deterred. She got busy. She continued to work with potential daycare providers in assembling their numbers. She coordinated potential providers to review their business plans at the Green Bay Area Chamber of Commerce’s Business Advance Center.  She made calls. Lots of calls. She and Greg Runnoe, her business development contact at Smet, continued to put their heads together and diligently worked.  They worked out the numbers. They toured the village. They picked out viable sites. They narrowed down locations. They narrowed down prospective daycare operators. They confirmed the numbers. Between the two of them they contacted everyone they knew to locate a daycare center in Hobart and they reviewed their steps to make sure the project became feasible.

Once they found the right operator, they began to explain the situation, how the Hobart community could fit into their plans, how the Pulaski School System needed this type of facility, how the nearby families would support such a business. In the end they succeeded. They came up with a plan, they reworked the numbers, they located a site that fit the criteria (adjacent to Hillcrest Elementary School and coincidentally owned by the Pulaski School District), and with the help of Shining Stars they designed a building and they broke ground.

It took about two minutes to break ground on Thursday. Yet when I asked Elaine when she first began working on the project, she told me it took all of two and a half years to get there. And the impact of her work will last much, much, longer than two and a half years. That’s why this is important. The Shining Stars Childcare and Education Center is expected to serve the Hobart community for twenty years plus. And while the village of Hobart’s effort was a two and a half year effort, once the correct pieces were identified, things came together very quickly. Greg Runnoe of Smet said “There can’t be enough said about how fast this has gone and how good the Village of Hobart was to work with, especially Neighborhood Services Director, Allyn Dannhoff and Development Director, Elaine Willman. In the end, everyone came together to get this done in a fast time table”.

Richard Heidel, Hobart Village President, echoed Runnoe’s comments and said “This is a real asset to the Pulaski School District. But I want to thank the Village of Hobart planning officials who did a nice job on the planning process. They completed a normal six month review process in 45 days and we did what we had to do and then we got out of the way.”  Milt Thompson, Superintendent of the Pulaski School District said, “I’m proud to be affiliated with the Pulaski School Board. We are so thrilled to be a part of this project.”

The fast turn-around means the school district will be able to utilize the new facility to operate its after-school program this fall.  The facility will be licensed for 125 children; ages 6 months through 12 years. The center plans to employ 7 lead teachers, 7 assistant teachers, a cook and director to manage day to day operations. Commenting on the effort made by everyone, Elaine Willman said it best, “We wanted to be ready for the new school year. This is the first time in 30 years the village and school district have worked together on a project. We just dug in and got the job done!”

Great things can happen and problems get solved when people work together! Sometimes it just takes getting the right people together to make things happen. In this case a public/private partnership project provided a “win-win-win” for the village of Hobart, the Pulaski School District and the Shining Stars Daycare and Education Center.

If you have a potential public/private partnership project that needs some attention or just some new thinking, think of Smet.  We aren’t afraid to collaborate. We aren’t afraid to tackle difficult projects.  We strive to find the “win-win”, in this case a “win-win-win”, in every project.  Give us a call!  We’ll work with you. We’ll crunch numbers with you. We’ll find a way to get to the “win-win”. 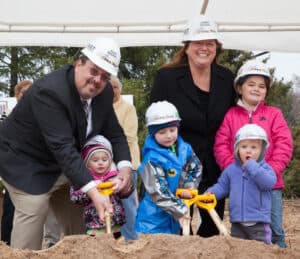